With so few good Westerns coming our way these days, I make a point of watching those that do. And, in the last few months I’ve had quite a choice. In fact, I’m in Western heaven right now…to a degree. In a nutshell, here’s what’s come my way recently: Diablo, Forsaken, Slow West, Jane Got a Gun, The Salvation, The Keeping Room, The Homesman (to watch) and Das finstere Tal (also to watch).

I’ll start with the worst of the lot first so we can move along. In fact, it is barely worth mentioning. It was that bad. I’m talking about Diablo (2015). I had really hoped that Scott Eastwood would bring across some of his father’s magic but…sigh. There is just a certain oomph missing – in fact, from all the actors (Granted, the story itself was poor so I can’t really put all the blame on them). Diablo has Jackson (Eastwood) tracking down his kidnapped wife (Camilla Belle) while the viewer discovers who he really is. The potential for a gripping film was there but alas, it was totally wasted and quickly ran out of direction and depth. Quite frankly, I was close on abandoning the whole shebang especially once Walton Goggins‘ character became clearer….the hope that maybe things would turn out better kept me going…only to see it get worse.

Having got that out the way, I can move on…

Forsaken (2015), starring Donald and Kiefer Sutherland as father and son wasn’t too bad. Kiefer plays former gunslinger John Henry Clayton, who, after many years of absence returns home to make amends with his father Reverend William Clayton (Donald). All this while the town is being tormented by railroad land grabbers. This isn’t an action-filled western but rather a broody/sombre one yet still moving along at a reasonable pace and doing a good job of leaving me wondering when enough was finally enough for John Henry. I always enjoy watching Michael Wincott and was surprised by his character’s actions. Demi Moore and Brian Cox also star. So, altogether, not a bad one but I must admit,  I watched roughly ten minutes, abandoned it and only continued to the end a few days later.

The Salvation (2014) starring ever brilliant Mads Mikkelsen was brutal and heavy. Enjoyable? Not sure. Don’ think  so as ‘enjoy’ is something that makes you feel better. But good it was. I was definitely holding my breath while Jon Jensen (Mikkelsen) sought personal revenge for the murder of his family. The attention to detail, perfectly cast characters and great sets make for superb viewing. The beautiful (South African) scenery, albeit with a few superimposed bits, is the only light relief you’ll get from this one. Well worth the watch. 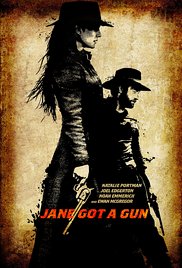 Now for my favourites. They are the ones that I can’t get out of my mind after watching. The ones I absolutely need in my collection:

Jane Got a Gun (2015) was great despite the poor ratings it has received (personally, I never go by these, I make up my own mind). Jane Hammond (Natalie Portman) and Dan Frost (Joel Edgerton) made for great partners against Ewan McGregor‘s villain Colin McCann. Jane, married to outlaw Bill, approaches Dan for help in saving her and her family from McCann. But, it isn’t a straightforward case of Jane-asks-Dan-for-help-they-win-everyone-happy. There is more to the story than meets the eye and it unfurls itself at just the right pace, not giving it all away, letting you wait, letting you process, letting you think. At the beginning I was wondering why Jane had done the things she did but by the end, I understood, with the film hitting home. While we often expect the villain to be loud and boisterous, those like McCann who appear calm and collected can be just as bad. He was spot-on and for a moment even showed he had a heart. (Keep a look-out for Rodrigo Santoro – you’ll never recognise him) 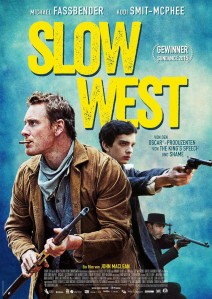 nd finally….Slow West (2015). Ahhh, what a movie. Refreshing. Brilliant. I was glued from beginning to end. Acting, cinematography, music…everything just right. Once again, a moderate-paced western (seems to be the current trend) but not for a moment did Slow West ever feel slow. Jay Cavendish (Kodi Smit-McPhee) comes to America from Scotland to find his true love. Having managed on his own so far yet still “wet behind the ears” he comes across Silas Selleck (Michael Fassbender) (or, maybe it is Silas who comes across Jay), an outlaw, who so kindly offers to guide him across the dangerous country (naturally there are ulterior motives). Well, they encounter some interesting characters and things are, obviously, not what the seem. I did not see the ending of this one coming. Definitely one for the collection.

Oh, just quickly…The Keeping Room (2014), technically not a Western, was not at all what I expected. Despite the grim topic of three women (Brit Marling, Hailee Steinfeld and Muna Otaru) left to defend their home during the American Civil war, it was really, really good. If like me, you’ve never seen Sam Worthington in an antagonist role, watch it. He’s uncomfortably convincing as the “bad guy”.

The Homesman (2014) starring Tommy Lee Jones and Hilary Swank is on my list to watch soon. Hope it is a good one. Das Finstere Tal (The Dark Valley) (2014) starring Sam Riley is also patiently gathering dust until I get to it – I’m intrigued as to what this Alpine Western will bring. I’ll keep you posted. (Update: Sombre and Cold: Das Finstere Tal )

9 thoughts on “Jane Got a Gun, Slow West, The Salvation and more Westerns”