As part of the Hail to the Chief Blogathon, I’ve decided to write about a movie that I don’t really like at all. Whaaaaat? Yes…but, there is method to my madness (sort of). You see, I had a lapse in concentration one day…those type where for a moment you forget that you’re an adult and become a teen girl…just briefly…and therefore do things you wouldn’t a short while later, when once again thinking rationally.

It all unfolded like this: I was absentmindedly surfing the cinema site to see what I could go see with a friend. For some reason (the stars were aligned…or misaligned?), I found myself on a “Ladies Night Out” promotion which had just opened for booking that morning. So, just for the fun I bought two tickets for a pre-screening of Olympus Has Fallen (2003) purely because it was bundled with the opportunity to see Gerard Butler and Aaron Eckhart in person (even though I’m not a huge fan and I promise I’m actually not one who is interested in meeting stars. I’ll put it down to “why not?” because where I’m living these promotional events are unheard of (or I’m just not “clued up” enough due to my lack of interest in these things)).

I don’t mind action movies, which Olympus has Fallen definitely is. Mike Banning (Gerard Butler) is former (disgraced, naturally) Secret Service agent who just happens to be inside the White House when terrorists attack. Predictably, this offers him an opportunity to save the day and President Benjamin Asher (Aaron Eckhart) and redeem himself.

So, why don’t I like this movie? I’m okay with action movies and I’m also okay with violence where it is relevant to the story. However, relentless, gruesome violence just for the sake of it is what I’m not okay with (I almost got the feeling that the make-up, stunt and special effects teams just wanted to have fun). But, I sat through it, because, the question/answer session would only be AFTER the movie thus preventing 90% of the cinema being empty by the time the opening credits rolled (due to the viewer demographic being pretty much only female and there for one reason…). 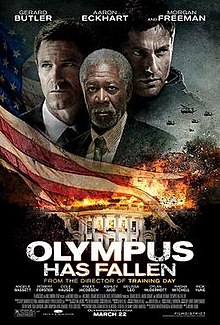 What made my evening (I secretly admit) is the chat with the stars. While Aaron Eckhart is fairy quiet and composed, Gerard Butler is quite a character. Very witty, cheeky and just a little naughty. I’m not a person who follows the activities and lives of Stars, quite frankly their lives don’t interest me, but it was fun for just one night to feel like a teenager and walk the red carpet that had been rolled out for us, pseudo-paparazzi taking our photos and all.

So, while the movie isn’t one I’d watch again, it has stuck with me purely because of the experience associated with it. A good night out to the movies with a little of something different. A memorable evening I’d say.

PS: I found Whitehouse Down almost the same in terms of story-line as Olympus Has Fallen, however I found myself enjoying it much more. While it was action through and through, it felt like there was more of a point to it all with toned down gore.