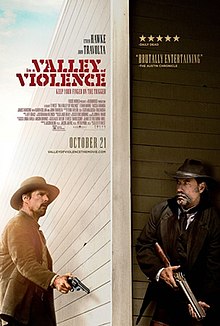 Movie Rob gave me the honour of selecting this month’s Genre for his Genre Grandeur series (head on over to last month’s post if you want to join in). What a perfect excuse to watch a whole lot of Westerns. I’m keeping the ones worthy of the “Grandeur” for Rob to publish at the end of the month. In the meantime, here’s my take on the newest Western I’ve watched:

OK…(releasing my breath)…I’m not sure where I stand with this one but it was an interesting ride. In a Valley of Violence (2016) is pretty much just that…a valley of violence. And into this valley comes stranger Paul (Ethan Hawke) and his dog Abby (Jumpy). They are just passing through (the reasons are briefly explored) but unfortunately get caught up with the marshal’s son Gilly (James Ransone) and his group of no-good hangers-on . Being left for dead, Paul swears on revenge and won’t rest until every last one of them is taken care of. And everyone who ends up in his way…including Marshal (John Travolta)

I wasn’t sure what to expect of this one but one thing I can say is that the performances were fantastic. From all involved. James Ransone, Karen Gillan (I’d never heard of her and now I see her 3 times in the space of 2 weeks), Taissa Farmiga and the list goes on (although, not too long as there are only 13 credited cast members). Ethan Hawke has redeemed himself in my movie-eyes since seeing him in The Magnificent Seven and Before Midnight, both of which I didn’t really feel for him. In this role, he’s back to showing us what he can do. John Travolta is, well…John Travolta. But the real star is Abby the dog, played by Jumpy…the dog. What a character!

While the story probably isn’t too original, I must admit that I was holding my breath in suspense to see how this would all unfold. The beginning also left my wondering who this Paul is and what he is up to.

What impressed me was the fantastic soundtrack. It worked so well and definitely stood out, which isn’t often the case. Oh, and those opening credits were so brilliantly done.

11 thoughts on “Not bad…In a Valley of Violence”