Being a pianist myself, of course I was going to rush off to watch The Piano (1993) as it came out on the big screen. Having no real idea what it was about (the days before YouTube and where trailers were pretty much only seen at the cinema) I was totally blown over by this wonderful movie. So much so that I bought the soundtrack sheet music (for piano, naturally), the soundtrack CD and even the book. This is one superb movie. Regardless of the Oscar nominations and wins. But, those too, it is absolutely deserving of:

Best Picture: oh wow…yes! Yes! Beautiful. Different. Totally engrossing. Sadly, no win but that’s fine because we’re still left with this work of art to watch over and over and over.

Best Director: Jane Campion was nominated for doing such a sterling job. Not winning this one though, she did win for…

Best Original Screenplay: The story is wonderful (See Best Actress for a very brief overview). To come up with such a unique tale requires great skill and creativity. No wonder this was a win for Jane Campion!

Best Actress: Holly Hunter plays mute Ada who is married off to a man she has never met and so is sent to New Zealand from Scotland with her beloved daughter. Landing on a beach from which there is quite a trip by foot to reach her new home, she is forced to leave her prized piano behind by her husband (Sam Neill). Baines (Harvey Keitel) sees an opportunity (which I won’t disclose) and manages to bring the piano back to his home and the story unfolds from there. Holly Hunter is fantastic as Ada. I can’t imagine it easy to play the role she does here. And so convincingly.

Best Supporting Actress: Flora, Ada‘s daughter, played by a then roughly 11 year old Anna Paquin is perfectly cast with Holly Hunter. She portrays a confident child that still has a lot to learn. Her role, which in my opinion, brings the situation to a head, is deserving of the win. Without a doubt.

Best Cinematography: Receiving this nomination but not winning is Stuart Dryburgh. Without the beautiful cinematography, most of the magic and passion of this movie would definitely have been lost.

Best Costume Design: Oh wow…need I mention the amazing costumes. Beautiful. Every single one of them. All courtesy of Janet Patterson who unfortunately didn’t win.

Best Film Editing: As with the cinematography, the editing is what brings across the magic. Brilliantly done to bring us this work of art. This nomination went to Veronika Jenet. 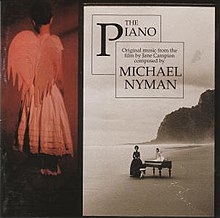 But….The Piano wouldn’t be The Piano without the exquisite soundtrack composed by Michael Nyman. Ah….just to think of it now. I can hear it in my head. It is well worth listening to…or even playing if you can (not an easy one though, but once those fingers glide…ahhhh….). I agree with Debbie’s post (here) that it was overlooked at the Oscars.

Thanks Once Upon a Screen, Outspoken and Freckled and Paula’s Cinema Club for letting me take part in this 31 Days of Oscar Blogathon again. For my last year’s entry, The Sting, click here. Hmmm….The Piano, The Sting…I’m clearly starting a pattern here in terms of titles.