For this month’s next review for Genre Grandeur – Nautical Films, here’s a review of Das Boot (1985) by Catherine of Thoughts All Sorts Thanks again to Sean of SeanMunger.com for choosing this month’s genre. Next month’s Genre has been chosen by Jay of Life Vs. Film (and head Shepard of the LAMB). We will be […] 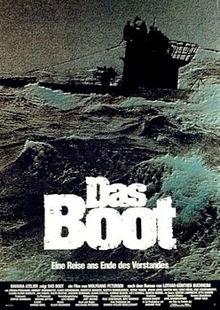 You want nautical? I’ll give you nautical. I’ll even give you the choice of going through 149, 209, 239 or 293 minutes of nautical (you can do the conversion to hours though, hee hee). And, if you’re after Oscar nominations, you can have those too: “Best Director”, “Best Writing, Screenplay Based on Material from Another Medium”, “Best Cinematography”, “Best Sound”, “Best Film Editing”, “Best Effects Sound Effects Editing”. And, Best Foreign Film nomination for the Golden Globes amongst a whole lot of other award nominations and wins. To top that off, this one is currently (February 2017) at number 70 of IMDB’s Top Rated Movies.

But…that’s not what makes this movie so great. No…it’s the movie itself. I’m on about Das Boot (1981). Wow…what an emotionally draining but always engaging movie.

Lieutenant Werner (Herbert Grönemeyer) a war correspondent, joins the crew of the German U-boot/Submarine the U-96 captained by  Captain Henrich Lehmann-Willenbrock aka Der Alte, (the Old One) (Jürgen Prochnow). What we experience is the suspense, the frustration, the boredom, the horrors, the difficulties, the camaraderie, the disillusionment and the tragedy (I could list lots more) of life during World War II, but more specifically, life on a submarine. While watching this movie, I felt for the crew, living in cramped conditions, narrowly escaping the enemy as well as storms and living with the hope (and desperation) of being safely back on land for Christmas Eve.

But, circumstances change the order of events. I don’t want to give away too much of the story as I think you’ll feel the movie so much more if you don’t know what is coming. Especially the ending. Gosh, if I could talk about that ending I would…you’ll have to watch it for yourself.

Directed by Wolfgang Petersen, this one will have you holding your breath and hoping for every last one of the crew to survive (no matter which version you decide on). Absolutely fantastic. And worthy of Movie Rob’s Genre Grandeur as you’ll experience “nautical” to its fullest.