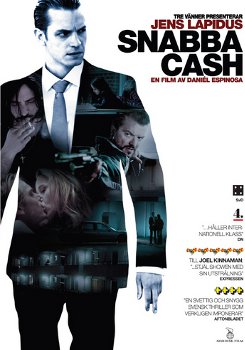 I love discovering new actors and actresses. Hence I often find myself watching someone in a movie and then seek out more of their works. In this way I came across Joel Kinnaman only a few weeks ago (I’d never heard of him before) and therefore “found” Snabba Cash (Easy Money).

Well, well, well…what a wonderful visual experience. You won’t get a wild action movie but instead, an introduction to the characters, their hopes, their motives, their relationships and then, a build up of the story. But don’t be fooled…it definitely isn’t boring. You’ll be intrigued as to how this will all come together and then unfold. If you’re like me, you’ll start feeling for the players. Sympathising with them. Hoping they’ll make it out so they can realise their dreams. Even though they are criminals and they should be behind bars.

Every scene is perfectly set up and captured. I really appreciate the reflections, backgrounds or the various interesting composition of shots supplementing character decisions and states of mind. Accompanied by an atmospheric musical score where needed. In my opinion, not just a movie but a well thought out work of art.

Oh…I forgot to tell you the very, very high level story. Based on the novel by Jens Lapidus and directed by Daniél Espinosa it is set in Stockholm and has three main characters: JW (Joel Kinnaman), an economics student,  works as a taxi driver to keep up with the lifestyle of his rich friends. When he meets Sophie (Lisa Henni), whom he wishes to impress, he becomes involved in cocaine dealings in the hope of earning easy and substantial amounts of money. Jorge (Matias Varela), a prison escapee, knows the cocaine business but also has one last score to settle with the mafia boss who put him behind bars, Radovan (Dejan Cukic). And finally, Mrado (Dragomir Mrsic), the man sent by Radovan to take out Jorge, whose job is complicated when social services leave him with custody of his young daughter.

(Note, unless you understand the language (Swedish), you’ll need to watch this one with English subtitles)

I’ll give you my thoughts on Easy Money II: Hard to Kill and Easy Money III: Life Deluxe as soon as the DVDs arrive in the post and I give them a watch.