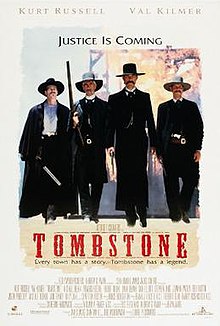 Doc Holliday, gunslinger, deputy marshal, gambler and forever connected, through his friendship with Wyatt Earp, to the famous gunfight at the O.K. Corral.

Before I go on…if you are looking for historical accuracy, you won’t find it here. Just a look at Doc Holliday in Tombstone (1993). So, where was I?

Oh yes. So…having watched him in Tombstone played by Val Kilmer, you probably know that he was suffering from tuberculosis. You’ll also know that he was an avid gambler (which I believe was a respectable profession back in the day). Doc Holliday, born John Henry Holliday, continues gambling and drinking despite his illness.

What never fails to amaze me (and, I really admire him for it), is that, no matter how ill he is, he is there for his friend Wyatt. As for Val Kilmer, to me he is the star in this movie portraying the sickly, and later dying, Doc so convincingly. What a fabulous character both externally and internally. A man, who claims he wasn’t as ill as he looked so he could face Johnny Ringo rather than have Wyatt take the risk. Or, who got out there to ride posse and did what needed doing despite feeling dreadful. “I’m in my prime” he proudly announces when Johnny Ringo questions if he has also retired from the law despite his obvious suffering.

What I appreciate is that he doesn’t rely on the excuse that he is sick and therefore has no need to put himself out there…quite the contrary, I think he knows his days are numbered and therefore makes sure he puts himself out there. What does he have to lose, after all? I think his last scene emphasises this in that he asks Wyatt to leave before he dies – the Doc Holliday doesn’t want to be seen as vulnerable.

But, can you imagine him treating your pearly whites? Didn’t think so. Yes, he was also a dentist, having been admitted to the degree at the Pennsylvania College of Dental Surgery. He even worked in a dental practice before heading to a warmer climate because of his tuberculosis. While Tombstone doesn’t mention this directly, there is reference to the fact that he is an educated man in the wonderful bar-scene “duel” with him and Johnny Ringo (Michael Biehn, also fantastic in this role) showing off their Latin and gun-spinning talents.

Quite an interesting character this Doc Holliday. Isn’t he? And perfect for this Medicine in the Movies Blogathon as he is both a patient and doctor.

As for Tombstone, if you haven’t watched this one, it’s high time you do. A wonderful movie narrated by Robert Mitchum and starring a host of well known actors including Kurt Russell, Sam Elliot, Bill Paxton, Powers Booth and many, many more.