Of course writing about Gregory Peck is going to come with a certain amount of bias from my side. But, hey…whatever…

The 3rd Annual Sex! (now that I have your attention) Blogathon asks for movies that imply rather than show. And not just a single sex scene (there are loads of movies with those) but oozing (maybe that’s not such a sexy word) sex appeal right through. While many movies fit the bill in a scene or two, I think Duel in the Sun (1946) is filled with sexual tension from beginning to end. So much so that it was apparently referred to as “Lust in the Dust” by critics.

Flirtatious dancing by Pearl‘s mother in the very first scene sets expectations for what is to come. Disguised as a western, we know this is going to be more than that. Circumstances have Pearl (Jennifer Jones) move to the McCanles ranch. She’s met in town by responsible Jesse (Joseph Cotton) and not a few miles later she’s already fluttering her eyelashes at him. She even offers to change her dark clothes right there and then. Admittedly, I doubt she knows the hormones she inadvertantly stirs by just suggesting this. Or maybe she does, as she does boldly ask Jesse if his brother is as nice as he is with almost dreamy eyes. Little does she know about the other, less gentlemanly brother waiting at the ranch. That he’s the one who would love nothing better than have her change clothes right there and then.

That’s where the real sizzling tension is. The bad, bad, baaaaad boy Lewt (Gregory Peck). But, make no mistake, he’s not all to blame. Pearl is just as guilty, for sashing around, fluttering more eyelashes and generally holding a tantalising posture and stirring wild dreams in the poor cowboys on the McCanles ranch.

Most of the time she acts as if she doesn’t want anything to do with Lewt but we know exactly that she does. He unsettles her but she likes it and she definitely wants more of that feeling. She denies it, oh, but she wants it. It is so obvious during the scene where she is helping count food stock – her mind is clearly elsewhere. And, what does she  expect to happen cleaning her bedroom floor on hands and knees with the door wide open? She slaps Lewt alright…but…well…that slap…it is more sex than the ensuing kiss and the lightning storm outside tells us all we need to know.

Even Jesse has his eye on Pearl and while he’s less direct and definitely less mean (Lewt lets her freeze in a pond just because he’d love to see her get out naked) there’s definitely a gesture here and a look there to show he has the same ideas as his brother.

There are so many scenes that I could write about but ultimately, they only make sense in context of the visuals. Besides, I’d hate to spoil this horrid but oh so good (don’t ask, I can’t explain) movie by giving away more than I already have. Let me just say…you haven’t seen bad boy until you’ve seen Lewt… 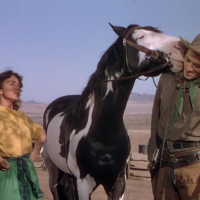