Scream (1996)…for some reason, this is one of the first movies that came to mind when the 2 Reel Quirky Cats’ “comedy horror” theme came up for this month. I had in my mind that it was funny. But, based on the trailer…it isn’t. Well…there may be a few funny-ish moments. Not really.

The story appears to be that someone is stalking girls who like scary movies. I’m sure there is something linking them all (there has to be doesn’t there?). Maybe they’re all linked to something they did way back when. Most of these 90s movies were like that…weren’t they? And I suspect the killer is someone they all know…someone they somehow wronged. Or, someone who’s jealous of the guys and so stalks the girls. The trailer doesn’t really give much away does it? Just that a bunch of girls are phoned while they are at home at night by some weirdo. 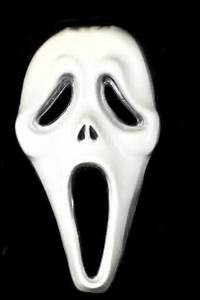 Well, ok…I need to confess. The reason I thought it was a comedy horror (and put it onto our poll) is because…uhm, well, yes…I was thrown out of the cinema way back when it was released. Maybe not thrown out…but close. My friend and I were laughing from the beginning and about 20 minutes in, the teenage couples who were hoping to get cozy started complaining (no point having two silly gals laughing while you’re hoping to have your date hold on to you from fear) and we decided to leave. I’ve never really seen it. I remember it was funny 😉 Going back to the pub where we’d started out before heading to the cinema was more fun (oh, golly, did I say that out loud?) Now it all becomes clear as to why it was a comedy in my opinion.

Our next month’s theme is “War Movies” but because it’s summer up there in the northern part of the globe, we’ll spread our posts out over two months i.e. July and August. Means that down here in the south I can hibernate and keep warm. Or catch up on those movies that I’m just not getting to.

As always, head on over to Realweegiemidget Reviews (here) for her take on this trailer and then join us on Twitter (@2ReelQuirkyCats) for your screaming comments. Have fun!