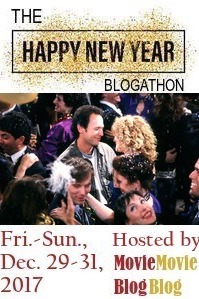 I can’t believe that we’ve already come to the end of another year. Or rather, the start of a new one. Well, bring it on…

…with The Happy New Year Blogathon hosted by MovieMovieBlogBlog.

I’m tackling A Long Way Down (not to be confused with Ewan McGregor and Charley Boorman‘s cyling trip Long Way Down). And…for those who glance through the story on the internet…don’t think it is dreary for New Year because of the “subject matter”.

What is it? Let me count you down:

10…Another one of those movies…the ones that I almost don’t watch, pick up when not really sure what I really feel like watching…and ending up thoroughly enjoying. This is one I went into with absolute no clue of the story.

9..The opening is what caught my attention. Not knowing who was in it or what it was about when I started out…having Pierce Brosnan show up meant it surely can’t be that bad. When his character announces that he’s decided to kill himself (on New Year’s Eve), first instinct was to switch off but shortly afterward I saw him trying to get a ladder up London’s Toppers building…and I was wondering what lay in store. Not in a morbid way.

7…Within the first four minutes, the mood is lightened  (dare I even say that) on the rooftop with the wonderful entrance of Maureen (Toni Collette)…spoiler alert…asking Martin (Brosnan) if he will be long and if she should wait somewhere. What a brilliant scene (although, actually not something to laugh at but this is probably deemed a black comedy after all). 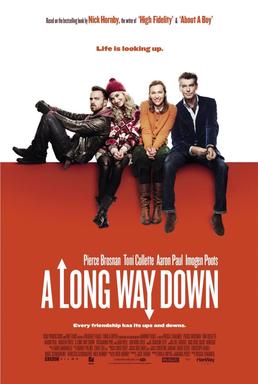 6…By the time Jess (Imogen Poots) and JJ (Aaron Paul) turn up (independently of each other) with similar fates in mind, I know that this is going to be an interesting one.

5…Clearly, the chosen spot is a bit overcrowded and after brief introductions, they all go their separate ways…well, for a few minutes anyway…until fate has them all in Martin‘s car. The four former strangers decide to make an agreement. They will work at getting through their respective problems, together, until Valentine’s Day. So unravel the respective stories while four relationships develop.

4…Based on the novel of the same title by Nick Hornby, this isn’t such a dreary movie after all. It has some dark and light comedy moments with some really beautiful ones and other quite serious ones mixed in. The topic at hand is never made a joke of.

3…Directed by Pascal Chaumeil I found this movie really beautiful despite the many negative reviews it received. Here’s the trailer to give you a taste of what it’s about:

2…Another spoiler…but the movie ends on the following New Year’s Eve. And…well, because it would be totally wrong any other way, with all four of them still friends.

1…Happy New Year (what else does one say here?)