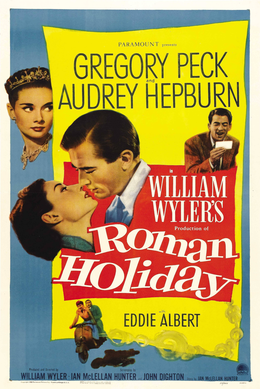 “I will cherish my visit here in memory as long as I live”. These the words of Princess Anne (Audrey Hepburn) after her 24 hour (give or take) adventure in Rome. With a man, I might add. Unchaperoned. Tsk tsk. This is Roman Holiday (1953).

Princess Anne is on a tight schedule of appearances and events during an official visit to Rome. Having had enough of this one evening, and being lured by the wonderful music and dancing outside the residence walls, she sneaks out to do exactly what she feels like doing for a change. However, the effects of the new drug she’s been given to help her sleep and be happy only kick in once she’s well on her way in this big city. Sleeping on a bench, reporter Joe Bradley (Gregory Peck, ahhhh….swoon, as always) comes across her, mistaking her as being drunk. Sleeping off her “hangover” in his apartment (due to circumstances) as he rushes off to work to discover the identity of this woman. And, being a reporter, also sees this as an opportunity for his big story. Hoping for exclusive, personal insight into the princess he takes her out for the day with the pretense of doing something nice for someone. And of course, they fall in love…supposedly. 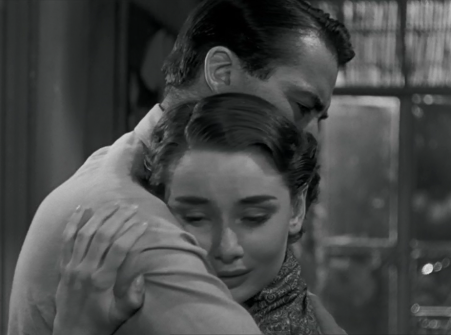 I say “supposedly” because I’m not really convinced with this one. They have wonderful chemistry but for me, they part more with respect and possibly friendship rather than love. Maybe you might think differently. Even the ending, to me, feels less like lovers parting. More like her having grown from the experience. Anyway, doesn’t really matter as the focus is the wonderful Audrey Hepburn. She takes on this role so wonderfully… balances that naive girl with the groomed royal so well. And we sympathise with her…she just wants to live, to be left alone, to do what she wants. To experience the everyday like the residents of Rome do (actually, the city is irrelevant). I absolutely love watching her start to relax and have some fun. Especially at the dance down by the boats…ah, that guitar part is something to behold. Ms Hepburn is definitely deserving of her Oscar (Best Actress in a Leading Role) and Golden Globe (Best Actress – Drama) wins for this role. I can’t believe that Audrey Hepburn was supposedly a newcomer…wow, now that is an actress…or should I say artist?

For some more posts on the wonderful Audrey Hepburn, head over to Sister Celluloid for her Audrey at 90: The Salute to Audrey Hepburn Blogathon