Absolutely no doubt, the grandeur musical for me is Seven Brides for Seven Brothers (1954). I can’t even tell you how many times I’ve watched it – many, many times as a young girl and since I’ve bought it on DVD, quite a few times as an adult.

It has Adam (Howard Keel), one of 7 brothers living a way out of the closest town, wanting a wife. Where better than to start than the nearest (yet far) town? Looking over many prospects, he finally casts his eye on Milly (Jane Powell) who, quite an independent woman for her time, decides she is ready to marry. And Adam is it. Ceremony over, they head back to Adam‘s place where she is introduced to the reality – 7 backwoodsmen living in a right old mess with little manners. While she changes the situation, the remaining six brothers decide they too would like wives and head off to town to get some (unwilling ones though). What better situation than an avalanche and a snowy winter to keep the ladies from getting back to town…and keeping them close to the brothers. Of course, by the end they’re not keen to leave.

With some wonderful songs that I’m humming right bow (“Bless your Beautiful Hide”, “Wonderful Day” and “Goin’ Courtin'” always stand out), this musical is a delight. It has some bittersweet moments too. Adam’s return to his home always has me a little teary-eyed. The barn scene is absolute pure fun.

Seven Brides for Seven Brothers was nominated for 5 Oscars of which it won one: “Best Music, Scoring of a Musical Picture”. The remaining nominations were: “Best Picture”, “Best Writing, Screenplay”, “Best Cinematography, Color” and “Best Film Editing”

While it may be criticised these days for the theme, don’t think too much. Just enjoy it for what it was back then. Sit back, hum along and have fun.

Head on over to MovieRob to see the other Genre Grandeur entries for this month. The genre was chosen by  Audrey of 1001 Movies and Beyond. Next month’s choice of genre comes from Ghezal of Ghezal Plus Movies with Film Noir.

– For this month’s next review for Genre Grandeur – Boston Films, here’s a review of The Town (2010) by Catherine of Thoughts All Sorts Thanks again to Ryan of Ten Stars or Less for choosing this month’s genre. Next month’s Genre has been chosen by Vern of the Video Vortex. We will be reviewing our […]

END_OF_DOCUMENT_TOKEN_TO_BE_REPLACED

For this month’s next review for Genre Grandeur – Prison Films, here’s a review of Greenfingers (2000) by Catherine of Thoughts All Sorts Thanks again to Jay of Life Vs. Film for choosing this month’s genre. Next month’s Genre has been chosen by Ryan of Ten Stars or Less. We will be reviewing our favorite Boston […]

END_OF_DOCUMENT_TOKEN_TO_BE_REPLACED

For this month’s next review for Genre Grandeur – Prison Films, here’s a review of Das Experiment (2001) by Catherine of Thoughts All Sorts Thanks again to Jay of Life Vs. Film for choosing this month’s genre. Next month’s Genre has been chosen by Ryan of Ten Stars or Less. We will be reviewing our favorite Boston […]

END_OF_DOCUMENT_TOKEN_TO_BE_REPLACED

For this month’s next review for Genre Grandeur – Prison Films, here’s a review of Lockout (2012) by Catherine of Thoughts All Sorts Thanks again to Jay of Life Vs. Film for choosing this month’s genre. Next month’s Genre has been chosen by Ryan of Ten Stars or Less. We will be reviewing our favorite Boston […]

END_OF_DOCUMENT_TOKEN_TO_BE_REPLACED

For this month’s next review for Genre Grandeur – Nautical Films, here’s a review of Das Boot (1985) by Catherine of Thoughts All Sorts Thanks again to Sean of SeanMunger.com for choosing this month’s genre. Next month’s Genre has been chosen by Jay of Life Vs. Film (and head Shepard of the LAMB). We will be […]

END_OF_DOCUMENT_TOKEN_TO_BE_REPLACED

For this month’s next review for Genre Grandeur – Westerns, here’s a review of The Magnificent Seven (1960) by Catherine of Thoughts All Sorts Thanks again to Catherine of Thoughts All Sorts for choosing this month’s genre. Next month’s Genre has been chosen by Sean of SeanMunger.com We will be reviewing our favorite Nautical Film. “Loosely defined […]

via Genre Grandeur – The Magnificent Seven (1960) – Thoughts All Sorts

END_OF_DOCUMENT_TOKEN_TO_BE_REPLACED

Here is my contribution to Movie Rob’s Genre Grandeur series – the full post is also published over on his site along with other awesome bloggers’ entries. Thanks Rob! Hope to see you all in January for the Westerns genre entries.

For this month’s next review for Genre Grandeur – Cyberpunk Films, here’s a review of Strange Days (1995) by Catherine of Thoughts All Sorts

Thanks again to Becky of Film Music Central for choosing this month’s genre.

Next month’s Genre has been chosen by Catherine of Thoughts All Sorts. We will be reviewing our favorite Westerns set in the “old West” – so, that excludes Contemporary Westerns i.e. No Country for Old Men, Hud, Desperado, Junior Bonner etc.

Please get me your submissions by the 25th of Jan by sending them to oldwesterncat@movierob.net

Try to think out of the box! Great choice Catherine!

Let’s see what Catherine thought of this movie:

Cyberpunk, the chosen genre for this iteration of MovieRob’s Genre Grandeur iteration, is a story that has a future setting, contains advanced technology and has a breakdown of society (as per Wikipedia). I’m very new to this genre so I may have gone with the obvious but the movie that fits these requirements is Strange Days (1995). 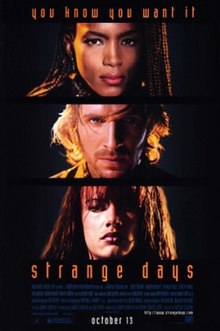 I’ll always remember walking out of the cinema back when it was released being totally blown away but also a bit nervous of the future. I haven’t seen this one since then (so, probably a good 20 years) and pulled it out of my collection last week. I was worried I’d dislike it but, whew, I still thoroughly enjoyed it. Possibly even more so because some of the messages make a bigger impact now than when I was a teen! Besides, the Millennium has passed and technology has advanced so it is quite interesting to watch.

How does it fit in with Cyberpunk? Well, the “future setting” may not be future today but back then it was definitely so. The story plays out over the 30th and 31st December 1999, just as a Los Angeles is on the verge of collapse and disorder prepares for New Year Celebrations. Lenny (Ralph Fiennes), a former cop, deals in SQUID discs. These are recordings of real events (ranging from the romantic to the violent) that can be experienced by the wearer of a special transmitter device as if they were there. But…the plot thickens as Lenny‘s ex-girlfriend Faith‘s (Juliette Lewis) friend Iris (Brigitte Bako) fears for her life. She is later found dead with her death having been SQUID recorded by the killer. So unfolds a story of murder, addiction, back-stabbing and violence as Lenny, together with friends Mace (Angela Bassett) and Max (Tom Sizemore) work to get to the bottom of this all while being chased by dirty cops and other thugs all trying to stop the truth from coming out.

While the technology may be old(ish) today and 1999/2000 has long come and gone, I still think the themes are relevant and don’t feel too outdated to watch. For a moment, I was transported back to the big Millenium New Year celebrations – while I didn’t experience the violence, the movie still manages to capture the mood so well. At least I think so – although I was on the banks of the Thames, the masses were still the same, the party spirit and anticipation probably similar world-wide. The technology seems to be almost, if not already, current and I’ve often found myself wondering when personal experiences will become traded as a form of entertainment (and how far people will go).

Some awesome music (which I rushed out to buy on CD way back then), including Juliette Lewis, Skunk Anansie, Peter Gabriel and Deep Forest amongst others, add to the gritty and dark feel. Have a look out for Hardly Wait by Juliette Lewis in one of the club scenes (which also portrays the atmosphere of the movie very well)

Great acting from a stellar cast that also includes Michael Wincott, Vincent D’Onofrio and Glenn Plummer. Directed by Kathryn Bigelow. While I don’t think it did very well at the box office, I personally enjoyed it.