For this month’s next review for Genre Grandeur – Westerns, here’s a review of The Magnificent Seven (1960) by Catherine of Thoughts All Sorts Thanks again to Catherine of Thoughts All Sorts for choosing this month’s genre. Next month’s Genre has been chosen by Sean of SeanMunger.com We will be reviewing our favorite Nautical Film. “Loosely defined […]

via Genre Grandeur – The Magnificent Seven (1960) – Thoughts All Sorts

END_OF_DOCUMENT_TOKEN_TO_BE_REPLACED

Burt Lancaster teams up with Ossie Davis, Telly Savalas and Shelley Winters in this comedic Western directed by Sydney Pollack.

Fur Trapper Joe Bass (Lancaster) is travelling with his latest haul when he is stopped by Kiowa Indian Two Crows (Armando Silvestre) and a group of his men who “trade” Bass‘ furs for their captured slave Joseph Lee (Davis, who was nominated for a Golden Globe in this role). Highly educated and very professional, Joseph Lee and Joe Bass, who can’t even write his name, head off to get the furs back. What they don’t count on is Jim Howie (Telly Savalas) and his band of scalphunters relieving the Kiowa of both the furs and their own hair. Through circumstance, Jospeh Lee ends up with Howie and Joe Bass continues his fur-retrieval efforts alone.

Davis definitely deserved the Golden Globe nomination for Best Supporting Actor for this one. He is absolutely fantastic as the former house slave heading for Mexico, now claiming to have “full Indian citizenship” (He was property of the Comanches before the Kiowa got him). Watching him interact with Lancaster and Savalas is absolutely wonderful. And who better than Shelley Winters as Kate to contrast Savalas as his wife/partner. Oh what a wonderful ensemble who seem to gel so well together.

Even music, courtesy of Elmer Bernstein, adds so much character to this movie. From the opening credits (which are likewise well done), to the end, aurally, it is a pleasure, with the main theme sticking in your mind long after you’ve finished watching. In fact, the theme is one of the things I clearly remembered now after not having seen this for a good 15 years.

So, fun Western. Keep a lookout for Burt Lancaster‘s circus background coming through in a “oh really?” moment near the end.

Head on over to MovieRob for his monthly Genre Grandeur series which is the Western genre this month. I’ll be sending my Grandeur-worthy entries to him for publishing at the end of the month. 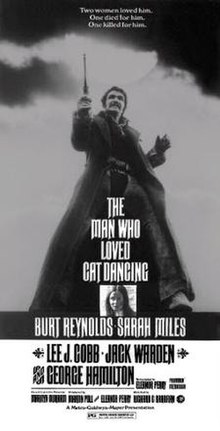