Wow…the third time that I’m having a chat about William Holden. But the weird thing is that I’ve only ever seen him in westerns (I’ll try change that for next year’s Blogathon). To me, he’s always that mature cowboy or outlaw (even father).**

Seriously, all three of his roles he’s been thoughtful, mostly level headed, even while on the run. He’s calm and collected. And in The Wild Bunch (1969), he’s no different. Yes, he’s an outlaw who’s pulled off some mighty big jobs and is planning one last big one…but, there is always a controlled air to him. And that approach of a planner.

What a movie this is. The opening was quite hefty…wow. And visually…it is something else. The imagery is so well done. I mean really…just think about those poor scorpions being eaten alive by ants…to be burnt to a crisp. It sets the scene for what is to come more than any other scene ever could. What also struck me is the use of laughter…have you noticed how many scenes have big loud, overstated laughter…

Oh…I forgot to tell you…William Holden plays Pike Bishop, the gang leader who, with his men is fleeing from a group of bounty hunters led by his former partner Deke Thornton (played by Robert Ryan). Across the Rio Grande, they steal some weapons (that must be the best executed railway robbery I’ve ever seen) for a Mexican officer (he’s a nasty piece of work) and a whole lot of double-crossing and shooting ensues. That’s roughly the story.

Holden is the perfect fit for his role – a  leader who is firm and fair, believable yet has enough meanness in him to be a successful (?) outlaw.

While I “enjoyed” (not sure “enjoy” is the right word for this one) this movie, I found the violence extremely brutal and I was struck by how much torture was presented in this one (be it animal or human torture). Add all the “massacre” scenes and it makes for viewing that you really need to be in the mood for. (I believe it was/is quite controversial because of all this violence) But don’t get me wrong…it is an excellent movie.

To change the topic…I really want to know which movie this banner comes from because darn, I want to watch that one…clearly not the aging cowboy:

Head on over to The Flapper Dame, Love Letters to Old Hollywood or The Wonderful World of Cinema to read some more about William Holden.

And for my past entries into this blogathon, click here for The Revengers and here for Wild Rovers.

**Ooh…I lie…I did see him in The Bridge on the River Kwai…aeons ago. 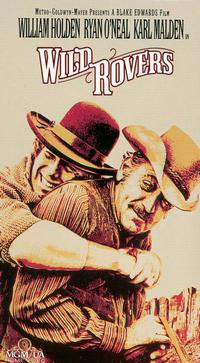 These Blogathons are interesting…I was oblivious to William Holden being known as the “The Golden Boy” until I came across The Golden Boy Blogathon (hosted by The Wonderful World of Cinema). I’m no connoisseur of his works and only know him from 4 works one being The Revengers, the others Wild Rovers, The Bridge on the River Kwai and The Wild Bunch. The former is the one I remember most of (the others just snippets) despite the fact that it didn’t seem to have done well at the box-office. But then, for me, reviews and box-office stats don’t matter, my enjoyment does and here I’d say is a movie that isn’t half bad. Possibly, remembering William Holden from this 1972 movie is why I didn’t really see him as the Golden Boy as he was already 54, an older (note, not old) version of the handsome man I see in the various Blogathon banners.

The only scene that has always come to mind when thinking of this western was the one with his son’s lifeless body dangling from the loft near the beginning. Clearly time to dust those memory cobwebs before I continued writing and tada…last night was the night! Lucky for me, a few years back I managed to buy the DVD and I had a good evening remembering various scenes. Amazing how the moment they start they become so clear.

The tagline “He bought six men out of hell and they brought it with them” pretty much sums it up, well, to the extent that “hell” was portrayed in those days (these days, I think the equivalent would be more brutal, bloodier and violent). Beginning with wonderful stereotypical western music, all upbeat and fun, John Benedict (William Holden) rides home with a herd of horses to be greeted by his family. Naturally, something needs to happen. Especially with the title The Revengers. And it does. All too soon – naturally. I won’t spoil the plot for those who haven’t seen this film but pretty much everything that John Benedict held dear is brutally ripped away from him sending him on a mission to track down the man responsible. From a prison called “The Hole” (hell) he hires 6 convicts to help him do the job. The “prisoner selection” scene is so much fun! They make for a wonderful combination of characters. Especially notable is Ernest Borgnine as William/Bill Hoop. Ah, he balances William Holden’s  ever more serious revenge-driven character perfectly. In fact, all actors make for a wonderful ensemble, each one complementing the other. I’m sure they must have had a good laugh on set. Anyway, the story is about John Benedict’s journey of revenge and therefore one of personal change.

What I really appreciate in this film is William Holden‘s ability to portray a loving father who supports his family. His acting managed to get me to feel with and for him and convinced me that he really was a father. Similarly, as he hardens up and is purely set on revenge, he still manages to bring across to the viewer his emotions and yet again I felt for him, understanding his reactions and decisions even when not necessarily the right ones from an outsider perspective. Especially the scene between John Benedict and Chamaco (Jorge Luke) discussing paternity possibilities brings across such emotion that only great actors can achieve.

All-in-all, a fun western to watch with some great acting.

Random info: If anyone has seen the 2002 film Sorority Boys, you won’t believe that Dave’s dad is the same actor, James Daughton, who plays Morgan, John Benedicts’ son in The Revengers.